Over the past couple weeks I’ve had the chance to start playing around with PhoneGap to create platform-specific apps using HTML5, CSS and JavaScript. It’s been going great.. the development environment is easy enough for a front-end developer guy like me to work with and I’ve already got a couple of test apps running on my iPhone and Android Galaxy. I’ve been wading through the PhoneGap API learning to use device-specific features like localStorage (stores data on the device), accelerometer (reads tilt of phone) and notifications (sounds and vibration). That’s actually been fairly straightforward. Getting my dev environment setup wasn’t too bad.. I think the toughest part was dealing with Apple’s labyrinthine provisioning system to allow me to actually test code on my device, which of course has nothing to do with PhoneGap at all. 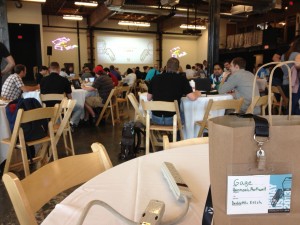 In the course of my research I saw that PhoneGap Day was happening in my very own hometown of Portland, Oregon just as I was diving into learning this new framework. Costing only $50 for the day plus two free meals and beer, I figured it would well worth my time to sit in and listen to some experts talk about the framework. Turns out I was right.

Admittedly, part of the reason I was right was for the outstanding swag. The complimentary t-shirt was pretty darn cool and the compact, travel-friendly USB charging hub was a pleasant surprise. Plus they gave out stylish foldout notebook packages and tons of stickers. The ratio of corporate sponsors to participants was as high as I’ve seen at a conference, so that probably contributed to the stellar swag situation. I can only assume that the techie bigwigs must see possibilities for greatness in PhoneGap and want to make sure they get on board early to influence the direction of the platform and the companies and developers who use it.

Beyond the cool swag, there were plenty of enlightening talks. The general sense was that you can build great apps on the HTML5 platform that rival native-language apps and that a lack of knowledge of platform-specific code bases like objective C and java is no longer a roadblock to creating apps. There were lots of great demos, including PhoneGap apps for creating HTML canvas-based games, apps using voice recognition and controllers for real world devices (via IMP and Arduino boards).

This is great news for me. As a developer I’m not too stoked about the prospect of learning to work in Eclipse or Xcode and getting familiar with new codebases, partly because of the time and effort involved and partly because I know my efforts will only be useful for one particular platform. But PhoneGap gives me a gateway to use skills that I already have to create great apps. And I even have a leg up on those objective C and java developers because my code can be used across all popular mobile devices rather than being constricted to just one.

I happen to think this is all pretty exciting. My eyes are all starry,  seeing oodles of possibilities for great apps I can build. I’m excited to see where this PhoneGap experiment might take me and my company. Check back here in another year or two, Harmonic Northwest might be specializing in app development by then.