A lot of people were aware that MusicFest NW happened last weekend, but there was also another festival was happening in parallel to the musical offerings: TechFest NW. As best I can tell this is Portland’s response to SXSW, a budding effort to create a cool technical conference that showcases Portland’s vibrant tech scene. I took in a few of the talks and enjoyed them, despite being a bit wiped out from some late nights of show-hopping. 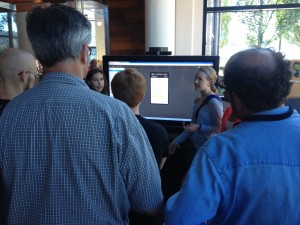 On Sunday afternoon the kids from the Innovation Academy were given free entrance to OMSI to give presentations on the projects they have been working on over the summer. The FHS App guys presented and the Community Safety App kids were there, too. There were a ton of kids and parents there and a lot of energy around the presentations. They all gave rundowns of their projects, which ranged from a student calendar to a video game based on greek mythology. I had taught most of these kids at previous Innovation Academy meetings and have been directly involved in development of a couple of the projects, so it was great to see them showing off their work. It was nice bookend celebration for the summer program.

There are plans to extend the academy throughout the school year and to expand the program to other schools next summer. I’m looking forward to staying involved with the kids, seeing where the program goes and continuing to advance the mission of improving technology education in Oregon schools.