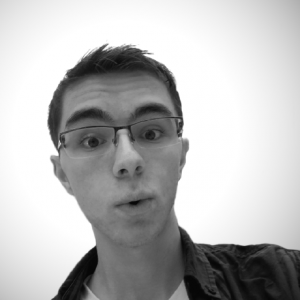 A little over a year ago, Cameron Andrews began his first professional web development job working at Harmonic Northwest. Since then he has taken the lead on dozens of projects and proven his prowess at a range of tasks including writing code for custom WordPress sites, putting together high-traffic landing pages, and designing UIs for websites and apps.

Figuring it would be better to use his words than mine to introduce him, I asked if he would be willing to do a Q&A that I could put on the blog. Being the good sport that he is, he accepted.

Gage: Tell me about the community gaming events you help put on at Whistle Stop Toys.

Cameron: I play Magic the Gathering on Wednesdays at 6 pm. That’s a casual gaming night—we only ask people to chip in like a dollar or two. We have board games and Magic. People go to be social and get out of the house and get away from the technology of today.

Friday is an actual tournament day where people pay $5 that goes into a prize pool. That’s also at 6 pm. That’s only Magic and we change the format every week.

We also have tournaments Sundays at 1 pm. It’s the same thing as Friday for the magic guys, but then we have the Pokemon kids (5-12 year olds). They also pay $5, but instead of that money going to a prize pool, we give them a pack of cards at the end. I love messing with the kids.

G: How did you get interested in making websites?

C: In high school, I met somebody who said he knew some people on the website team. He said they were all in 11th and 12th grade and about to graduate and go to college and that the school was looking for a new webmaster. I said all right, that sounds kind of interesting.

At that point I had barely touched a computer—I didn’t really know anything about the technical aspects of a computer. I was in the right place at the right time and they said they would pay me double minimum wage to learn to code over the summer. I was in 9th grade at the time and that sounded pretty good!

Somebody who was redesigning the website over the summer took me under his wing and taught me everything. It was sort of like an apprenticeship. Toward the end of the summer, I was building some of the pages myself from scratch. It was HTML, CSS, javascript, and some PHP. We did it all manually.

G: You won some awards for a website you made in high school, right?

C: Toward the end of 10th grade, my supervisor told me about a statewide website design competition. He said the school needed a new international mini-site tailored to getting as many international students as possible—it was a diverse high school and a private high school (Lancaster Mennonite School). It was a full-blown separate website on a subdomain of the main website. They gave me free reign and said have fun with it, here are some basic design guidelines and you can enter it as your competition entry.

So I made the design and looking back on it, it was not a pretty design, so I don’t know how I won, but I took it to regionals and won regionals. It was a crazy experience, I hadn’t done anything like that before, like a design tournament. We went on to the state competition taking place at Dickenson College. That was my first experience being on a college campus. I had a whiteboard explaining the process I went through and a laptop with the site locally hosted and I had my iPad Mini showing the mobile site. I don’t think they use it anymore, but they did at least through 12th grade—I was managing that, too, along with the regular website.

The following year I entered my own personal website and won states again that year. That year I knew a lot more about modern design—it was when the minimalistic approach and modern flat design trend was coming out, and that was more of my design aesthetic anyway. So I kind of had an advantage.

The year after that I entered two websites and got first and second in regionals and ended up getting second place at state.

G: What kind of things are you working on with Harmonic Northwest?

C: Currently we’re working on the NYC Bar Legal Referral Service site. It’s an interesting project—it’s definitely one of the bigger projects I have worked on. There are a lot of moving parts, like a custom carousel, and a lot of big modular pieces. It’s a lot of work but it’s rewarding when it comes together.

G: There are a couple of smaller sites you have worked on, too, right?

C: Yeah, there’s the CaP Biomaterials website. It’s a partner company of TESco Associates, which is another website I worked on. Ironically they are located about an hour away from where my parents live in Massachusettes. It’s pretty crazy how small the world can sometimes be. I’ve also worked on the IEC Thermo website and the Columbia Sportswear patents site.

G: What kind of frameworks are you working with?

C: WordPress primarily. WordPress is great for having other people or companies manage it afterwards. It can be a little unwieldy at first, but once you really dive in and start doing the custom work, it comes together really quickly. That’s a huge plus about WordPress—it lets you have a lot of content on a website that is easily organized and easily editable.

G: Have you learned much?

C: I’ve learned a ton working at Harmonic Northwest. Instead of going to college and being a jack-of-all-trades, I’m learning one-on-one and the learning is streamlined in a way. Like earlier today when I asked a question and it was just answered then and there, and then all of a sudden, boom, it’s fixed, rather than having to wonder for a while and look around. It’s nice to have somebody more experienced show me that kind of thing.

G: What kind of things are you excited about learning?

C: The thing that is so enticing is getting that one-on-one experience. It’s just so much nicer to be able to learn things in a one-on-one environment rather than in a classroom with twenty other people. It’s nice being able to rely on someone who really knows what they are doing rather than relying on guesswork. I know I still have a ton to learn but being able to have somebody who has, not really a map, but an understanding, really is helpful.

G: Any technologies you are excited about?

C: I like seeing where technology is going. To an extent, that does affect how website design works. Let’s just say augmented reality becomes a thing tomorrow—like a piece of eyewear that you don’t notice. All of a sudden websites might use a whole different visual language. Who knows where that is going to go.

Following design trends is another pastime, I guess. A lot of people don’t understand how much time and effort can go into a design. It really is a huge aspect of everyday life. Like the chair you sat in, that was designed, right? Somebody once asked me: is a pencil a piece of technology? And it is. A long time ago they didn’t have that, and then it became the latest and greatest thing.

G: It’s a rare person who do can both design and development, and you can do that, which is really awesome. Do you feel like you could focus more on design and be happy doing that?

C: I think I could. There is a nice break being able to switch between the two. Designing all day everyday—I feel like I might get bored with that. And that’s where the whole programming aspect becomes fun to me. It’s a nice change of pace. It’s really cool to be able to switch between the two on the fly. Some days I’m like “I just want to design something cool and I don’t know how I’m going to do it but I’m going to do it and we’ll just see what happens!”