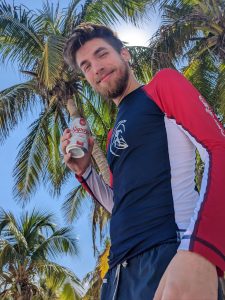 David Siemers is a superstar software engineer who joined up with Harmonic Northwest back in 2019. He was lead developer and project manager on our company’s largest website deployment to date: a redesign and replatform of the Van’s Aircraft store.

David took some time away from snorkeling and sampling tacos in a tropical paradise to join me for a Q&A.

Gage: Where are you working from right now?

David: I am working from Puerto Escondido, Mexico.

G: How long are you going to be in Puerto Escondido?

G: Are you working full time out there?

G: Anything in particular you are enjoying in Puerto Escondido?

D: The food, the beach, and especially the people. Everybody here has been laid back and very kind—it’s great here.

G: What drew you to doing development work?

D: I spent most of my teen years building and repairing computers for my friends and family and I initially wanted a career in hardware and IT. At the end of my senior year of high school, I went to a barbecue hosted by my friend’s surrogate dad, who ran a software development company. While there, I got into a conversation with him about the things I was interested in and what I was doing in my free time and he essentially said “I don’t have anything for you to do immediately, but I like you and I want you to work for me.” I began working for him right after I graduated high school, doing IT—fixing computers, maintaining their servers and network, as well as anything help desk related.

After about six months of working there, their front end developer left. My boss at the time was asking around if we knew anyone who was looking for a development job to fill the roll and I said “no, but I’m willing to learn.” He gave me a shot and I ended up really enjoying it. I haven’t looked back nearly a decade later.

G: Before coming to Harmonic Northwest, what kind of development roles had you been in?

D: Primarily I was working for that same company I just mentioned as a senior full-stack developer. I started there doing front end work, but I eventually ended up getting my hands into a bit of everything. It’s a small company, so you ended up wearing a lot of hats.

Along with that, I’ve worked with a wide range of companies doing contract work, helping businesses meet their goals and get projects across the finish line.

G: Did you do some Magento stuff, too?

D: Yes! I used to run an e-commerce business and had tried a bunch of different platforms and for awhile I was using Magento and making any necessary customizations myself. Funny enough, I ended up moving away from that to WordPress and WooCommerce and that’s the platform I ultimately ended up using in the long run. Magento is powerful and can be customized to meet just about any need a retailer has, but it was ultimately more than I needed; WooCommerce was much less complicated and was a better fit for my needs.

G: What do you do at Harmonic Northwest?

D: I do a little bit of everything. For the past three years, it has been Magento development and project management, but lately I’ve been doing a lot more work with React. It’s been nearly entirely e-commerce focused. Between the previous company I ran and work I’ve done in the past, I find myself always gravitating towards e-commerce. Role wise here, I don’t really have an “official” titled role… I guess I’m a senior engineer?

D: Something like that. I do all the fun stuff!

G: What kind of frameworks are you working with right now?

D: Primarily Next.js. That has been my bread and butter for anything React. It’s super nice. The general architecture is well laid out and all the server side and static generation stuff is really neat and can really create a well-integrated, fast application. It’s developer experience is great, too. I’ve also been playing around with Faust.js which is a fledgling framework built on-top of Next.js with tools specifically tailored towards WordPress development.

G: We recently had a launch of an e-commerce site. Could you talk about that?

D: Absolutely! It was a fun build build using Shopify’s APIs to drive a headless e-commerce site with Next.js. It allowed us to have a really performant site because the frontend was static while also leveraging the scalability and security of the Shopify backend and API. It was a really nice coupling of the two.

G: What do you like about working at Harmonic Northwest?

D: First and foremost, the people. That’s the one of the biggest things that initially drew me in. You were leading the dev meetup in Port Townsend, a super kind and charismatic person, doing all of this community work that I was attracted to. When you offered me a contract position, that eventually turned full time, I was ecstatic because I really liked everything that you stood for and thought you were a genuinely good person. To top it off, I eventually learned that a lot of other awesome people at the meetup were also working with you. There’s a wonderful mix of folk here, with a wide variety of skillsets that not only make our projects successful, but I get to learn a lot and grow from as well.

Harmonic Northwest also does a lot of cool, exciting stuff for clients like Columbia, Intel, Fort George and Van’s, not to mention a lot of non-profit organizations. You guys stand behind the work you do and I wanted to be a part of that.

G: Any particular technologies that you are excited about right now?

D: Yes, this giant push for headless and JAMstack sites. I’m really enjoying the decoupling of the front end from the back end and how it allows for sites be built really rapidly. When you’ve got a monolithic coupled environment, the front end often ends up being a pain in the butt because everything is so tightly tied together. When you can just fly on the front end and really meet the client’s needs and have a great developer experience, that’s awesome.

Because the data and how it’s managed is decoupled from the frontend, it’s a lot easier to integrate data from multiple sources. So, let’s say you want to pull in CMS content from one source and wanted to pull in e-commerce products  from another and also integrate a proprietary API for fulfillment, you can nicely tie them all together in one front end application.

Not to mention, you often get security advantages and speed improvements that are a lot more difficult to achieve with a more traditional stack.

On the horizon, I’m also interested in using WebAssembly and Rust.

G: I haven’t heard much about WebAssembly lately, but I remember hearing about it probably like 6 or 7 years ago and it seemed like it was a big deal back then.

D: Yeah, it’s super cool. It reminds me of the days of flash and Java applets without all of the integration and security problems.

One of the current front end pain points is that you’re essentially locked into using JavaScript or other languages that transpile into it, like TypeScript. On the back end, for the most part, you can use whatever language best fits the job. WebAssembly opens up the front end possibilities a lot, allowing us to create experiences that would be not possible or limited in scope using JavaScript. I’d specifically like to use Rust to code a WebAssembly application as it’s generally more performant and has a lot of the niceties that C/C++ doesn’t have.

G: Back in November we had a big site launch. Would you want to talk about that?

D: I was the lead developer for the Van’s Aircraft complete e-commerce site rebuild. That project was built on top of Magento. We implemented several services and tools that allow syncing data back and forth between their SysPro ERP and Magento as well as allowing them to easily manage customer data. It was a large and complicated build that had to adhere to Van’s unique business processes and needs. It was really rewarding, though, as their business requirements were extensive and we were able to find and implement technical solutions that were able to meet their goals. It’s always fun to have a big challenge like that and progressively chomp away at it until finally get to launch! Sometimes it takes a little while, but here we are.

G: Is there anything you want to highlight about how things have been shaping up at Harmonic Northwest?

D: We have traditionally done a lot of WordPress work and have really created some awesome stuff for our clients, but in the past couple years we’ve been doing progressively more React and headless work, which excites me. We’re also finding ways to integrate WordPress with the new technologies we’ve been working with and that’s been a blast.

Our network of contractors and employees is growing and it’s getting to the point that we have someone who has the skillset for just about any challenge we are facing. It’s really neat to be able to say “hey, I have a question about something” and then go down our Slack list and be like, oh, Kiyota or someone like that can answer my question. It’s wonderful to have a community like that.

G: Would you want to talk about how your role has been developing at Harmonic Northwest?

I’ve been working a lot towards becoming a better lead and improving my project management skills. With our network of developers and contractors, being the lead on a project means you really get a chance to exercise those skills. I’m used to honing and sharpening my ability as a developer, but interpersonal communication and leadership skills often get overlooked as an engineer, so it’s great to grow that side of myself.

G: Yeah, that’s true. You really took the lead on that Van’s project and you were the only one who could be the project lead… I certainly couldn’t do it. That was really fantastic. I can see how there are opportunities to build that project management skillset.

D: I think I grew a lot. I still have a lot of places I want to improve on, but I think I’m at least a little bit better than I was at the beginning of the process.

G: Could you send over a picture of you doing something silly in Mexico for this blog post?